The YoungCuts Film Festival announces our 2012 Animation Prize!
A juried award that includes a free class with a Disney Animator!

Meet and Learn from Andreas Deja!

Studio Technique Montreal and YoungCuts are pleased to offer the opportunity for a young animator to meet and learn from legendary Disney animator Andreas Deja!


Andreas Deja has worked at Walt Disney Feature Animation for 30 years. He has created some of the most memorable characters animation has known, and has worked on several Academy Award winning films. He is also one of only a few animators the Disney Studio has authorized to draw Mickey Mouse.

Andreas is a recipient of the Winsor McCay Award for outstanding contribution to the art of animation, presented in 2006 at the 35th Annie Awards. He is responsible for many of animation’s famous characters, including Roger Rabbit, King Triton, Gaston, Scar, Jafar, Hercules, Lilo, and Mama Odie. He is also the creator of the world famous blog Deja View. Andreas is one of the industry’s leading animators, respected by his peers all over the world for his remarkable influence on the art form.

We will be featuring animated films submitted to the YoungCuts Film Festival on our web-site as part of our People's Choice voting. Based on that voting, YoungCuts will select ten films for our Animation jury to consider for a special Animation prize. The winner will have a free seat in a Shop Talk Masterclass given by Andreas Deja - a one-day Animation Intensive Seminar, held in downtown Montreal (June 2, 2012). (The prize does not include travel and/or lodgings in Montreal, but this a rare opportunity to learn from a 30 year award-winning Disney veteran, and well worth the trip for any serious student of animation.) 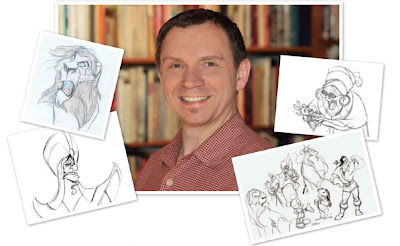 The Shop Talk Masterclass is not software specific and is accompanied by visual presentations. The class is suitable for animation industry professionals, students or animation enthusiasts. For more information on the class and how to sign up to meet and learn from Andreas Deja, click HERE!

And if you are a young animator (or know someone who is) keep reading on how to submit your film!

So far this year, we have received submissions in more than ten languages, from more than twelve countries. Take advantage of our regular submission fees by submitting your short film for consideration before March 31st. We do accept films after our regular deadline, but the later your film is submitted (and the longer it is) the less chance there is of it being picked. Remember that even if your film is not completed, you can still take advantage of our lower submission fees by submitting your film and reserving your film's spot in front of our judges!

And for the next two weeks, until March 5th, take advantage of this coupon code YCNL2 for a $5 rebate on your submission fee when you submit your great short film!