We kicked off this year's festival in style with the High Fidelity HDTV Opening Gala on Thursday September 24 at Newtown Restaurant in downtown Montreal. Our Honorary Chairman, Justin Trudeau, delivered an inspiring message to the young filmmakers, and we screened a YoungCuts produced video for the Cedars Cancer Institute. The video featured a behind-the-scenes story of the Cedars DragonBoat race and its successful quest to raise money to fight cancer. Broadcaster High Fidelity HDTV's co-founder, Ken Murphy, delivered an incisive speech encouraging young filmmakers to not accept the status quo in their quest to begin their film and television careers.

The top 100 films are now being screened at Cinema du Parc with screenings running until Thursday, October 1st, 2009 - nightly screenings at 9:10 p.m. Each evening features a different theme, with a winning filmmaker being announced at the end of each screening. Check back daily for breaking news! 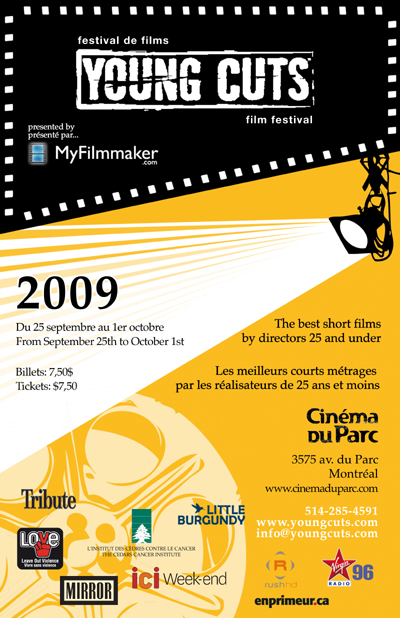