These films were nominated for 2012 YoungCuts Best Short Short Film. (By Short Short, we mean films 5 minutes or less.)

The winner was announced after the Grand Prix screening, Saturday, October 13th at 9PM.

You can also watch our films submitted in 2012 for consideration in the Short Shorts category,

and the films submitted in 2013 for consideration in the Short Shorts category.

Our selection of films for you to watch, vote and share; The Short Shorts KUDOS. 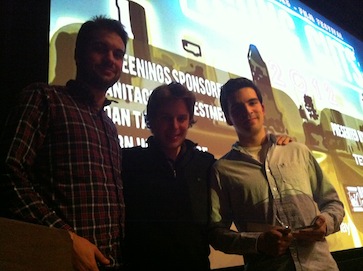 The nominated films and filmmakers are:

Winner of Best Short Short Film at the 2012 YoungCuts Film Festival was Chronoscope by Dominic Remiro (Canada). Congratulations to Dominic and his team and best of luck on his future projects! (Pictured is Dominic accepting the award with 2 of his 3 collaborators. Dominic's 3 collaborators on Chronoscope: Mario Daoust, Vincent Laurin and Étienne Marcoux. )

Watch all the 2012 YoungCuts Award Winners!

To watch the films, you need to be either one of the participating filmmakers or a subscriber to the web-site. You can subscribe HERE.